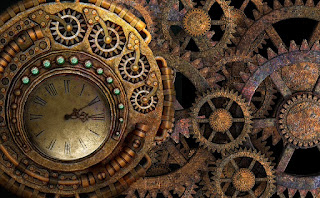 This is a spoiler-free review.

After the juggernaut that is Stranger Things season 2 Netflix dropped in October of 2017, everyone binge-watched it within 24 hours, looked around in a daze, and wondered out-loud, what do I watch next?

One of the recommendations I heard repeated multiple times is the German language thriller, Dark. All I knew is that there were missing children, kids on bikes, monolithic power plants, and creepy vibes. I began to watch the show, muddling my way through it at first, but fell deeply into the storytelling. I am currently re-watching the first season, as season 2 is scheduled to drop in June 2019.

Here's a snapshot. Our story takes place in a fictional small town of Winden, somewhere in Germany. The town is in a tizzy because there is a teenage boy missing, Erik Obendorf. The police have been unable to solve the crime, and so everyone is understandably upset and on high-alert. We also learn that another boy went missing under similar circumstances back in 1986. A group of kids all meet at school and plan a crazy high school kid stunt they will do that night while all their parents are at an emergency meeting about the missing boy. There are six kids who meet at the creepy cavern in the dark at night. By the end of the night, one of those kids will also go missing. So there's a mystery: where is Erik and where is the other missing boy?

By the end of episode 1, we will become aware of quite a bit of drama involving this group of kids and their parents, but at the same time, the story ends up expanding, and we learn it's not just a story of these kids and this incident, but it's the story of four families in one town, whose lives are intertwined in ways none of them fully realize. These families, this town, they are cursed, locked in a puzzle that changes as we go along. The mystery we try to solve isn't the mystery at all -- it's just one part of a bigger puzzle.

In the end, we will visit three different time periods of Winden during season 1. Season 2 may include even more.  What makes this story so good?
I found it very tricky to keep track of the web of characters; luckily someone brilliant created a flowchart, which I have stuck to my fridge. There are a few others you can find, but this one is my favorite. You may want to wait to look at the chart until after you have watched most of the show.

I won't lie to you, it's a not a perfect match to Stranger Things. This show is much darker and has none of the funny quirkiness of Stranger Things. Because part of the story takes place in the 80s, it does have some nostalgia in the clothes and music on display. It's more of a match in tone to Twin Peaks, however. With true evil on full display -- not the paranormal kind, but the kind that originates inside the most depraved kind of human.

I watch this show during a dark period of my life, right after the death of my older sister. It would be fair to say it was a great fit. The show centers on families dealing with gut-wrenching grief and loss and the utter hopelessness of being able to do nothing to resolve that pain. It was healing to be able to watch this show. As I'm watching it the second time, I'm in a different season, and it's still great television. I highly recommend it, if you enjoy dark and twisty thrillers that become ever more surprising as you go along.