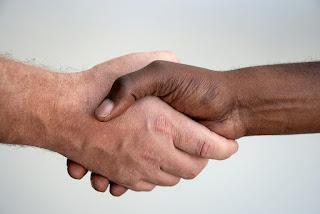 Politically, America is more divided than ever, with seemingly no room for compromise. The Best of Enemies is a true story that shows what can happen when very different people from different worlds come together and work for a common cause. The story is set in Durham, NC, 1971. Durham happens to be my current home, and residents of Durham are proud as can to call Ann Atwater a "favorite son" of Bull City.

Ann Atwater is an African American female who knows how to get things done. She appears to be the appointed mouth of her people. She is shown advocating for families who are being treated unfairly in the housing market. She attends town council meetings where a landlord might be called to task for treating families of color unfairly. When Ann is treated dismissively, she's not opposed to slapping someone on the head with a telephone receiver.

C.P. Ellis is also a natural leader and admired by many. He just happens to be the local leader of the Durham Klu Klux Klan. Naturally, he's white and we see him leading men into late night unfriendly visits to people he wants to scare into submission.

These two very different people clash like oil and water when both are approached to help chair a committee that will decide how to resolve a schooling crisis. After the school that teaches African American kids burns down, the city residents are asked to come together and form a temporary council, called a "charette." Whatever the residents decide will be final and implemented by the council. Ann and C.P. are both approached as leaders because they speak for opposing groups of people. The film deal with the events before, during and after the charette, and shows how Ann and C.P. came together for sake of the town and their children.

So, that's the summary. Does it work? The film was well-paced and kept a good balance of showing both the importance of the topic and the humor of the pair's relationship. The performances were well-done. Taraji Henson is the true draw in the acting department. She depicts an Atwater who is feisty, furious, yet self-controlled. I had to laugh, though, to see how they tried to give tiny Taraji the heft needed to replicate the person of Ann Atwater. You can only add so much weight to a person when you can still see their slender legs. Other than that, her performance is exemplary, and I haven't heard any complaints from anyone who knew her about anything she "got wrong." Sam Rockwell as C.P. is decent, too, and Wes Bentley and a barely recognizable Anne Heche play supporting roles. Heche is particularly touching as the wife of C.P., portraying a woman who knows her husband's flaws, yet seems to see her way to loving him anyway. But she's not afraid to call him out on his bullcrap. Every man needs a wife like this.

So the story is interesting, timely, and inspirational. This will be a film that many schools will want to show to rising students. There was also enough exposition to make it historically accurate and show interesting details about conversations that lead to the charette even being held. Overall, it encourages people to not be afraid to speak out when they see something wrong.

I received the honor of seeing the film at a special premier with Taraji Henson, Osha Davidson (the author of the book), one of the film producers, and one of the screenplay writers, plus men of faith who knew Ann before she passed in 2016. This is a great historical drama that manages to be funny and touching.
African American biography drama history movie review