Panos Cosmatos, Mandy, and Beyond the Black Rainbow 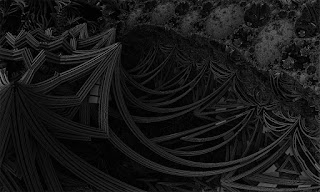 Under the crimson primordial sky,
the wretched warlock reached into the dark embrace
His fist closed around the serpent’s eye, strange and eternal.

My most loved movie of 2018 was Mandy, written and directed by Panos Cosmatos, and starring the ever-divisive Nicolas Cage. Red and Mandy live a peaceful life in the woods until a crazed cult leader decides he has to have Mandy. After his gang and some otherworldly creatures attack the couple, Mandy ends up being killed. Red spends the rest of the film getting revenge.

Cosmatos has directed only one other film, a trippy dreamy picture called Beyond the Black Rainbow (2010). Beyond the Black Rainbow takes place in a scientific institute where plants are grown that can supposedly make people feel enlightened and happy. But inside the institute, a young girl who is telepathic is kept captive. We see her plight, and then she escapes. Although Beyond is clearly an inferior film to Mandy, it has all the clear markings of its director’s paintbrush.

Top 10 things Mandy and Beyond the Black Rainbow have in common:
Bonus item: Both movies feature a scene where a crazed person driving a car sees a vision of a person who isn't actually there next to them. A little random, but a similarity I noticed.

You might be wondering why I’m drawn to a movie like Mandy. I’m not all about violence in films by any means, and I try to avoid movies with unnecessary violence. When you are watching an overly gory film, there’s a point where your brain actually turns off and you are no longer participating in the story. Remember the scene in A Clockwork Orange where the main character is forced to watch an everlasting loop of violent images? Saturation of any particular thing creates a zombiefied feeling.

I was drawn into this film by the first half of the movie – the synth music, the moody lighting. I enjoy directors who can create a mood for me. It is very much like sitting and listening to a synth-wave music album and letting the world dissolve. I enjoyed the world where Mandy and Red lived in the woods, creating art, reading novels, and just being together.

When the transition happens from this first part to the violent and blood-infused second part, I was invested in Red's grief so I went along for the ride, the same way I did the Bride in Kill Bill. It became a revenge picture, but I appreciated so much that Mandy rejected the narcissistic Jeremiah Sand. Yes, I was sad she was killed, but she left the world empowered. She wasn’t forced to endure a rape or loss of her agency. She laughed in his face, and the killing happened without her being exposed or humiliated on camera. Instead, we have the long close-up shot of Red’s agony.

Maybe part of me longs for the intimate life Red and Mandy created for themselves in the woods before everything went wrong. In any case, Mandy was an experience I won't forget. I hope to see more from this director. For more info about these two movies and the director who created them, read this interesting article.
action fantasy movie review science fiction