on February 17, 2016
Risen is an excellent story and provides a great example of storytelling in a faith-based film. It follows the faith journey of one Roman centurion from doubter to seeker to perhaps follower. This was an interesting concept because this is one of my church's tenets: we welcome doubters, seekers, and followers to our morning services. 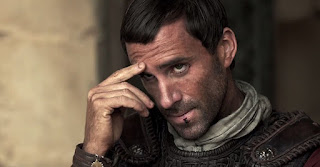 Clavius is a Roman centurion, disciplined, hardened by war, and extremely cynical. His one and only dream is a "day without death." He is asked by Pilate to make sure no one steals the body of the man called Yeshua, who has just died by crucifixion. But when the body goes missing, Clavius leads the hunt to find the missing corpse and make sure rumors cease that Yeshua has risen.

This was a fast-paced film, part police procedural (if a Roman soldier can be compared to a policeman)/part historical drama/part inspirational story.

Clavius is like many Roman soldier we have seen before in movies. He is surrounded by violence and does all things with perfection, When he comes home from a bloody day, he just wants to soak in a bath and have some peace. Only Pilate keeps his busy with many tasks, from breaking legs, to guarding tombs, to investigating missing bodies.

He takes the tasks set before him seriously. He is a given a new assistant who is equally ambitious. His investigation takes him through the streets of Jerusalem, both in the wealthy and not-so-wealthy areas.

The cast did an excellent job with their characterizations. The dialogue seems sincere and true to life. They characters are complex and not stereotypical. They each have a reason for what they have done and are currently doing.

This is a good film for rediscovering the story of Christ's resurrection from an outsider's perspective. What would it be like for a Roman to speak to the followers of Christ? He thinks many of the characters are mad or "touched," as he calls it.

Although many of the scenes are not found in the Bible, all of the scenes are plausible and could have happened. The joy of Jesus' followers is compared inadvertently to the drive of the Romans. I think a film like this will do more for evangelical efforts than many of the faith-based films out there currently.
Christian movies movie review mysteries