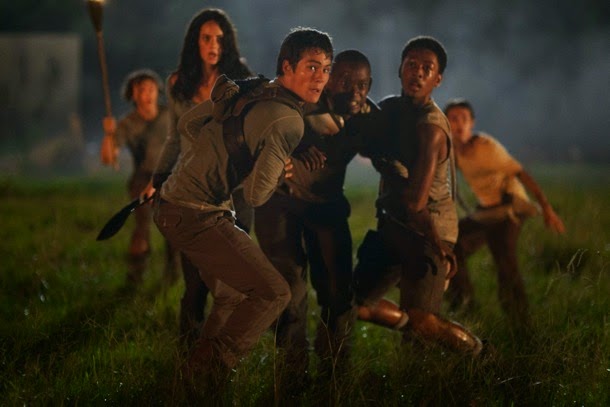 The Maze Runner is the latest film adaptation of a best-selling teen novel. Written by James Dashner, the book was published in 2010, so it took only four years for this book-to-movie project to come to completion, which is similar to the Hunger Games book-to-movie conversion. Four years is really not that long in the adaptation business. But I digress . . .

Thomas wakes up in an rickety, rusty elevator, which is rising at an alarming rate. At the time, he doesn't know who he is or why he is here. Disoriented and nauseous, when the elevator stop, he is greeted by a welcoming committee of boys that would rival Peter Pan's the Lost Boys or the gang of thieves in Oliver Twist. They speak to him roughly, won't answer any questions, and lock him up. Welcome to the Glade, Thomas.


The Glade appears to be a small clearing surrounded by tall stone walls on all sides. The boys have a simple society. Everyone has jobs. They live in small shelters and grow their own food. They only have three rules: do your part, never hurt another glader, and never go outside the walls. The only exception to this rules is the Runners. Runners spend their days running around the outside of the walls, which open only during the day. The area outside of the walls is known as the Maze. You never want to be out in Maze after dark. That's when the Grievers come out . . .

Before Thomas arrives, everything seems simple. Once a month, the elevator rises and another boy shows up, along with a fresh batch of supplies. They never know their name or remember anything they were doing before they arrived. But when Thomas shows up, things change. His curiosity is unusual and makes the others feel uncomfortable. Thomas only knows two things.  He wants to know what's outside the walls, and he is sure he should be a runner. Only where do these feelings come from? Thomas has a lot of memories that come in flashes when he's asleep. He's afraid to tell anyone in case they suspect he is not just another boy. And to be honest, he's not sure he is.

The film was packed with action and kept the viewer wondering what would happen next. I was a little surprised with the overall feel of the movie. At times, it almost had the feel of a horror film with the things "outside the walls", called Grievers, making scary noises, appearing suddenly, and oozing gross stuff onto whatever they came into contact with. On the other hand, it felt like an action film, with lots of running, chase scenes, narrows escapes made just moments before certain doom.

The characters were done well. We don't get to know them too well, but that's appropriate for this type of film which relies on action, rather than thoughtfulness. I especially enjoyed the character Newt, played by Thomas Brodie-Sangster. I recognized him as the cute little kid from the British comedy Love Actually, which came out in 2003. It's 11 years later, but Brodie-Sangster hasn't lost the impish grin. Many viewers will know him from his role in Game of Thrones, which I have never watched. All of the gladers make being stuck in a maze look cool. They are dressed in what I would like to call orphan chic. Who chooses their outfits? Wearing army pants (some with pant legs up, some down), shirts with sleeves rolled up, and homemade wristbands, there hasn't been a better dressed group of teenage boys since the Newsies. 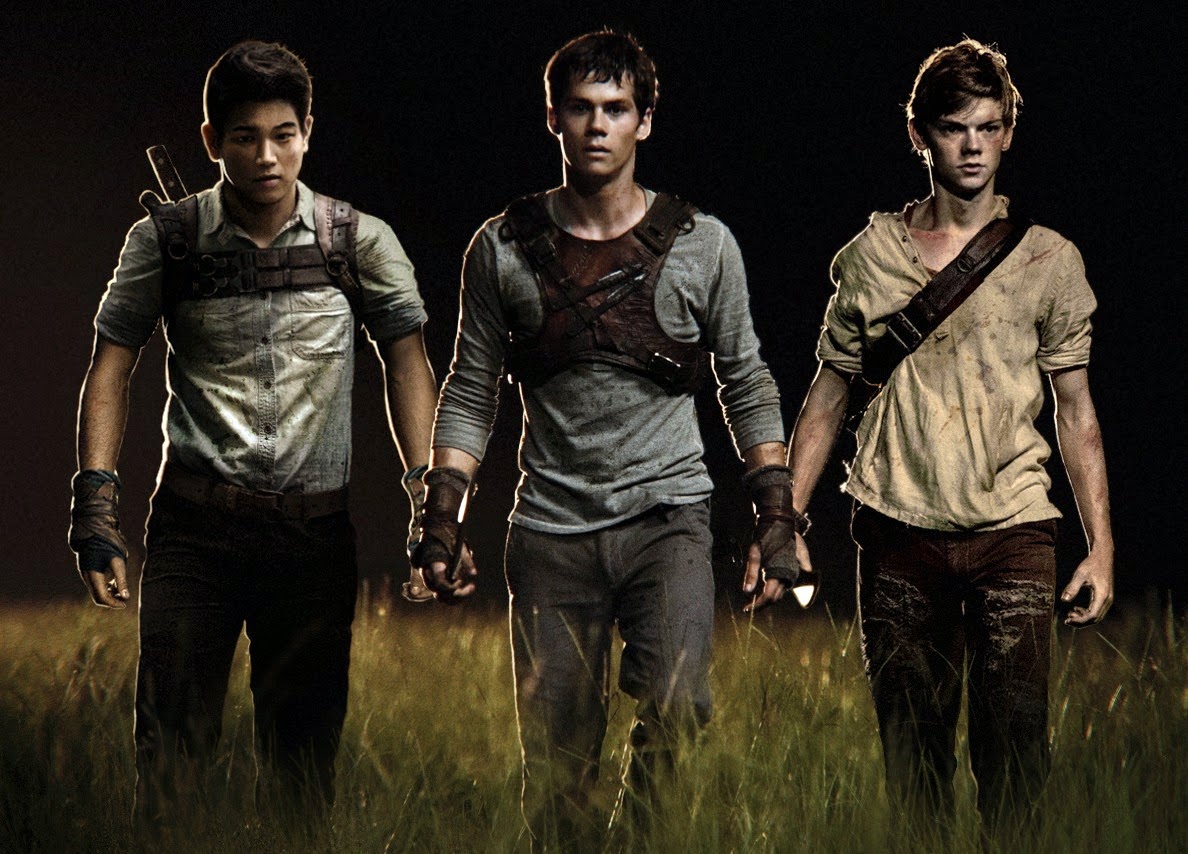 The setting was well done, combining the simplicity of the Glade with the menacing feel of the Maze outside. In one scene, the area called the Blades (which look like giant razor blades standing up), becomes the backdrop for Thomas and another Runner to complete a heart stopping chase through the different blades while they begin to close.

The theme or purpose of the movie is probably its weakest part. It is very unclear, even when the big reveal is made, as to why the gladers have been put into this maze, although much is made of a person in charge saying, "All of this was done for a reason." Dystopias are a type of science fiction plot. The best science fiction seems to take the problems of this world and reveal them in a way that takes them to the extreme. The audience then has to wrestle with the question is this what we are headed for if we continue down this path. Without the clear parallel in reality, however, the science fiction film seems, at best, just an interesting couple of hours.  This keeps the Maze Runner at the good, rather than great level. But it's sure to gain popularity among teen viewers and fans of the book.