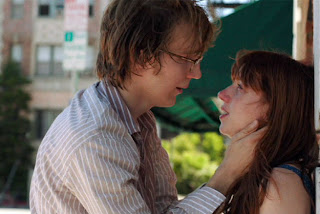 What do the following have in common: Pygmalion and Galatea, Henry Higgins and Eliza Doolittle, and now Calvin and Ruby Sparks?  Each pair includes a man who makes (or remakes) his ideal woman and a woman who refuses to be controlled.  These stories ask us to consider what, if anything, does love have to do with control?  Do we love someone as they are, or do we only love them when they do what we want?

Calvin Weir-Fields (Paul Dano) is a writer who wrote a good book once.  He doesn't seem to have any stories left.  His social life consists of taking his muttish dog on walks and occasionally doing author talks to audiences he feel no connection with.  One day, he has a dream about a girl named Ruby Sparks.  She is beautiful, unique, fun, and compassionate.  She loves him just the way he is.  His therapist suggests he write a story about Ruby.  Calvin begins to write Ruby's character, and then, oddly, she appears in his apartment.


Could there be a more perfect scenario?  Calvin has created this girl in his mind and suddenly she is real.  And when he writes about things Ruby says or does, Ruby does them.  Talk about your fantasy coming true.  His brother doesn't believe him until Calvin writes that Ruby speaks fluent French and she does, right in front of him.

Acting as the prophetic voice of the thought that will come to haunt him, the brother says, "For every man out there, please tell me you aren't going to let this go to waste."  Calvin solemnly promises, "I'll never write about her again."  And he doesn't . . . until Ruby starts to form a mind of her own.

She decides to take a class and finds her own friends.  Calvin gets out his typewriter and tries to manipulate Ruby's actions, not knowing what the consequences might be fully to doing this.  This creates an amusing series of events where things are taken to the extreme.  And it becomes frighteningly clear that Calvin is not so sure he is ready for Ruby.  What happened to his ideal woman?

This movie was impressively done.  The story was unique, although it had remnants of the stories above, it was done in a fresh way.  I couldn't predict what was going to happen next.  The shocking conclusion is much more climactic and sinister than I could have imagined.  And although it's a comedy, and it is genuinely funny, it is reflecting something very real about us as people.  Often we are looking for love to get something.  We want someone to soothe us, comfort us, make us feel better about ourselves.  And when that person isn't able to do that 100% of the time, we feel betrayed and let down.

The characters were well drawn.  Calvin is the perfect ruffled author type with mussy hair and a truly wounded spirit about him.  Ruby is probably what every guy wants: pretty, fun, generous, flirty, quirky, and affectionate.  Calvin's brother Harry is the antithesis of him.  Harry is smooth, polished, analytical, successful.  Then there are all the minor characters which are just fun and seem like real people:  Calvin's writer friends, his hippy Mom, and Antonio Banderas is delightful as Mort, his mother's live-in boyfriend.

The chemistry of the two lead actors is convincing.  Altogether, I would say this is a movie worth seeing.  It will generate discussion for sure.