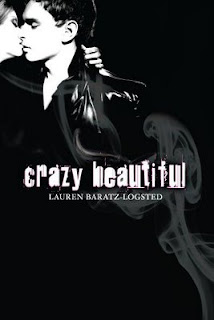 In this dual perspective book, we have Lucius and Aurora telling an updated version of the Beauty and the Beast fairy tale.  Lucius, known by his classmates as "Hooks," is an amputee.  He lost both of his hands in a chemistry accident which forced his family to leave home and start a new life in a new town.  Aurora is a beauty, a dark angel, that has a kind and loving heart.  She and her father have recently lost her mother to cancer.  They start a new life in this new town, as well.

Aurora is instantly welcomed by her classmates; Lucius is instantly rejected.  Yet they form a connection from the moment they lay eyes upon each other on the school bus.  They just know each other.  Still, they end up running in different circles at school.  Lucius becomes a loner.  His only friend is the school security guard who used to be a football hero before he blew out his knee.  Aurora runs with the popular crowd, but sees the shallowness of her companions and watches Lucius from afar.

Their paths end up crossing when both work on the school production of Grease.  Can the beauty see past his hooks and tainted past to the true person underneath?

This was an enjoyable young adult novel.  The story is told in alternating chapters by Lucius and Aurora.  We hear what both of them are thinking.  Both characters are likable and bring some depth to the story.  Since we are told at the beginning that this is an updated Beauty and the Beast story, the plot is fairly predictable, but the decision to make "the beast" an amputee made the story seem fresh and unique.  I can't recall another time when I read a young adult novel with an amputee as a main character.

All in all, I would say this is a book that many teens would enjoy.  It is short enough that reluctant readers would even be willing to give it a try.  The target audience is going to be females, ages 13-16 or so, mainly because it is a love story.  This is also a relatively clean book, although there is on comment directed at Lucius regarding a sexual behavior.  Other than that, it is a clean read, which is always great to find in a teen book.