Movie Review: Kar-Wai Wong's In the Mood for Love 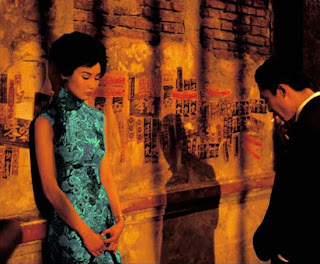 Mrs. Chan (Maggie Cheung) and Mr. Chow (Tony Leung) live next door to one another. They discover their spouses are having an affair. We never see the infidelities occur, for what is happening with Chan and Chow is much more compelling. After they both uncover the secret and bond over being the slighted spouse, they begin to spend time together and pretend that they are the ones having an affair. They do not intend to sleep with one another, but they are trying to understand how it began. They go out to eat and order what each other's spouses would order. They role play walking home so they can imagine who might have made the first move. They practice accusing their spouse of having an affair so they can imagine what they will say when the guilty admission is made.

And then there is the martial arts serial they are writing together. He needs her opinion of the work. She begins giving him feedback, and he shares the profits with her. They spend so much time together, that the lines between role playing and reality begin to blur. And it all must end somehow, but why does it hurt so much?

This is a beautiful film. The actors speak very little, and what they do say isn't really what they mean. They talk about unimportant things: cooking rice, the tie he is wearing, and the handbag she is carrying. Underneath all of these meaningless conversations is true longing and suffering.

And then there are those dresses Cheung is wearing. She isn't afraid to wear the same ones again. So many times in American movies, every time you see the actress she is wearing a different dress. Not Cheung . There is no need to get a new one. They all flatter her to a tea, and her accessories are so simple: a ring on one hand and a small silver bracelet or watch. The only actress that comes even close to being this beautiful is Grace Kelly.

This is one of those movies to put on your must see list. It is truly perfection. Each scene filmed has a purpose. And you see much more by watching then listening.