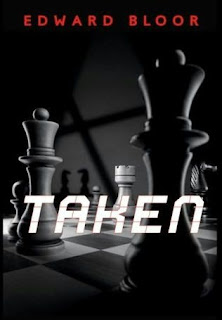 Taken is an exciting, original book that fans of Anthony Horowitz or Gail Giles books will love. In a futuristic world, the classes are more divided than ever. Kidnapping has become the norm, a social contract between those that have and those that have not. The kidnappings have rules, and if the rules are followed, everyone gets what they want without violence.

Charity wakes up strapped to a stretcher in a van. She knows she has been kidnapped, but feels calm because if she just remembers the rules, she knows she will be returned to her family safe and sound. In order to keep herself calm, she conjures up memories from happy times, and these memories intersperse with details about what is happening in her present. The memories hold important clues that readers can use to discover the identity of the kidnappers before Charity does.

But this kidnapping doesn't seem to be going to specification. And Charity tries to talk to her guards to see if she can negotiate her own deal.


This book started out strong and continued to get more interesting as the book went on. This is a world very different from our own. Because of the kidnapping industry, the wealthy kids live behind gates with guards protecting them with weapons at all times. The fear has caused a great divide between the poor and wealthy, and though it seems like the wealthy kids are the lucky ones, we can see how much both groups suffer from the separation. Charity's father is distant, and her mother is dead. In order to receive the companionship from adults she so desperately needs, Charity turns to the maid, Victoria, who is like a guardian angel to her.

Most of the scenes are full of action, and the ones that are slower contain important clues that the reader will remember when they become important. Bloor is one of my favorite young adult authors today. His characters are clearly drawn.

The cover with the chess game hints at how even the seeming pawns in this story have an important role.
book review science fiction