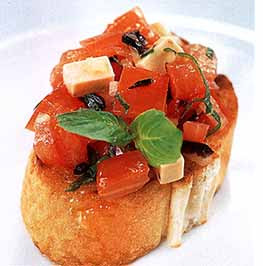 I don't enjoy cooking. But I enjoy eating, so I am always on the lookout for recipes which require little effort but offer the illusion of creating something gourmet. A few weeks ago, before vacation, a co-worker brought some fresh tomatoes in to share. The most appealing ones to me were the Roma tomatoes. When I asked her what I should make with them, she suggested bruschetta.

I have heard this word before, but didn't realize it was made of tomatoes. I thought it was a type of bread that you dip in other things. That's essentially what it is, but since the main ingredient in bruschetta is tomatoes, this dish contains bread and vegetables, which means this can be an appetizer for a party or a light meal.
Here's the recipe I used, along with some tips I had to learn along the way.
The whole process took me about an hour and a half, but 50 minutes of that was marinating/draining time. This means only half an hour of effort and an hour of time waiting, during which you could watch television or read a book. Most of the 30 minutes of effort was spent chopping. You could use canned tomatoes to speed up the process, but it will taste less fresh.

Start by chopping 4-5 Roma tomatoes. After washing them off, peel the tomatoes, and chop to a coarse size, about the size of salsa tomatoes. Let the tomatoes drain for about 20 minutes in a strainer.
While you are straining the tomatoes, remove four garlic cloves from a garlic bulb. The bulb is the whole package of garlic, the cloves being the individual pieces of garlic. After you peel the skin off the garlic bulb, use your thumb to remove some garlic cloves. You need about 4 cloves for this recipe. To prepare the garlic for bruschetta, lay a clove on a cutting board, take a kitchen knife, put base of knife blade on top of clove (with tip pointing away from you), bang your fist on top of the knife, and remove the skin.
You should also have time to slice the bread. Instead of pre-sliced bread, buy a loaf of fresh Italian bread. Cut bread into half inch slices. If you are only serving one or two people at a time, consider storing half of the bread in the freezer to be used at a later time, and keep the rest at room temperature in a zip-lock bag. This is because the topping will make the bread soggy if you don't eat it right away.
After the tomatoes have finished draining, mix 1/3 cup of olive oil with 3 T. balsamic vinegar. Get the best kind of balsamic vinegar you can afford. The quality does make a difference. Also add 1/2 tsp. dried basil (or fresh basil) and a pinch of black pepper. Beat the dressing with a whisk. Add the tomatoes mix into the dressing. Let the tomato mixture marinate in the fridge for 15-30 minutes.
About 5 minutes before you remove from fridge, broil bread slices on both sides until toasted (about 2 minutes each side, but watch carefully). On one side of the bread, rub one of the garlic cloves you "unwrapped." This should coat bread slice with garlic on one side and bread will look like it is buttered.
Optional: Put Parmesan cheese or thin slices of mozzarella cheese on bread and broil for 30-40 seconds more.
Put the toasted bread on a plate. Spoon tomato mixture on top of each slice and serve immediately. Like I said, the bread gets soggy if the tomato mixture sits on top too long. If you are making this dish for a party, I recommend putting the bread out on a tray and the tomato mixture on the side in a bowl with a spoon.
This recipe is delicious and very fresh. It's perfect for a summer dish, and especially when tomatoes are in season. You could also use the tomato mixture as a topping for hamburgers. Yum!
recipes