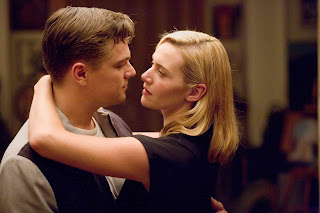 Revolutionary Road should win the award for most depressing movie of the year. They could invent a new category with this film in mind. This movie is my worst nightmare come to life. Frank (Leonardo DiCaprio) and April Wheeler (Kate Winslet) play a married couple in the 1950s. We understand that they are perfect for one another, but their marriage is horrible. They tear each other down and say awful things to one another. They are two wounded people bumping up against one another. They don't talk about these problems and instead focus on the surface problems. They have bought into the lie that "this is as good as it gets." One day, April decides that good enough isn't good enough, and she wants a change. She decides she can find that life in Paris. If they would only move to Paris, then they would be happy. Frank agrees and then later changes his mind. They don't move to Paris and fight even more. The movie is this couple fighting the entire movie. Instead of talking to one another, they decide to have affairs to numb the pain of their lives. They tear each other apart until there is nothing left.

Now don't get me wrong, Revolutionary Road is a well-made and interesting movie.

I was riveted the whole time, and my heart was beating fast the entire film. I'm not really sure why that was. Needless to say, it was intense. The acting was superb. Forget about The Reader; Kate should have received an award for her performance here. The same goes for Leo. I love Leonardo DiCaprio, and I always will. I have loved him since he was a little squirt on Growing Pains. Both of these actors can show the torment they are feeling with one look. Then, effortlessly, they cover it up to hide their pain.

That would be enough, having two lead actors work this kind of magic, but the supporting cast of Revolutionary Road is perfect as well. John (Michael Shannon) is perfect as a tortured mathematician who has had shock treatments. He is like an oracle who can only speak the truth, even though no one wants to hear it. There is never a dull dinner party when John is invited. The next door neighbors say much more when they are not speaking.

All that being said, what is the point of Revolutionary Road? I am trying to imagine someone trying to spin this to a studio . . .

Storyboard guy: Okay, Joe, so there's this married couple, you see? And they're both young and beautiful. They meet, get married, and they're miserable.

Storyboard: One day they decide to move to Paris, but the husband, see, he changes his mind, and they don't move to Paris.

Storyboard: Then they are still miserable, you see?

Storyboard: No, it gets worse.

It's not a movie that will make you cry. You just feel empty, and wonder what the heck just happened.

What do we learn? Don't get married? Is the moral really that they should have moved to Paris? Let's just get real here. It wouldn't matter if they lived in Paris or not. Neither one of them could admit their fears to one another. They never helped each to grow or took the time to reach out to one another. And that's the trap they couldn't escape, not suburban America.
drama love stories movie review

I write reviews of meaningful, inspiring films for Reel Inspiration. But, like you, I couldn't get a handle on the theme of this movie and it certainly wasn't inspiring (with the exception of the performances which could inspire someone to go into acting for roles like that.)

This was a throw back to the fifties moralty plays - but like you said - I wasn't sure what the moral was. So thanks for your honest review.

Beth Kephart said…
This is so clever!