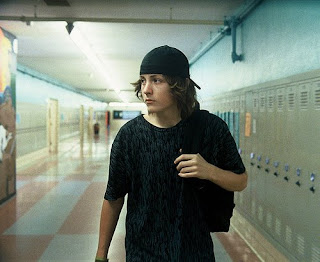 If you helped commit a crime and never told the truth, would the guilt eat you alive? This is the quandary teenage skateboarder Alex finds himself in. Director Gus Van Sant gives this film a dreamlike quality. The truth of what happens that night unravels slowly piece by piece. By the time we know the truth, we are completely on Alex's side and are worried that he will be discovered. We know that Alex visited Paranoid Park with his friend Jared. We know that a security guard has been murdered. And we know that Alex almost called the cops and threw up. But we don't know until late into the movie what happened between visiting Paranoid Park and Alex throwing up. Alex has the look of a trauma victim. He doesn't respond to anything with emotion. He walks around in a daze, like he's not really there. To emphasize his displacement, Alex has conversations with people where their voices fade in and out or music plays over them. We know Alex isn't really having a conversation. He is merely in the room.


I found this story very intriguing. It was also very personal to me because I have a nephew about this boy's age who used to be quite passionate about skateboarding. It was difficult for me to watch this movie because I kept picturing Alex as my nephew. To be put into Alex's situation would be so difficult. Alex doesn't seem to feel like he can confide in anyone. He is afraid of the adults he should be able to trust. If my nephew were in this situation, could he trust me to support him?

The actor who played Alex, Gave Nevins, played a realistic teenage boy. He would rather hang out with the skaters from the park than hang out with his pretty but shallow girlfriend. He feels pressure to do things from his friends. He is a good kid who is put into a bad situation.

This movie had the tone of a Hitchcockian suspense. The suspense comes because we don't want Alex to get in trouble but also we want him to be put out of the misery of having to carry this weight around. This movie is also based on a young adult novel by Blake Nelson. The movie contains language and sexual situations. I think this movie is appropriate for teenagers, though. The sex is off camera, and it is hardly erotic since Alex is in his hazy phase. Also, this movie would be a good one to discuss with your teens. What would you do in Alex's situation?
crime movie review mysteries