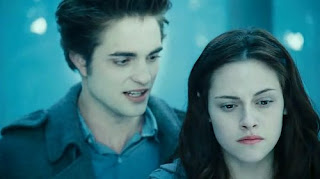 As a young adult librarian, it was my God sworn duty to view the movie that is causing teen girls all over the universe to roll over, clutching their hearts and suffering from increased heart palpitations: Twilight. I am going to try to review this as the movie alone.

The acting was okay. Of course, not much acting was required. To be cast in this movie, you had to be sexy hot and make cool poses. Robert Pattinson is convincing as Edward. He takes the acting up a step by hiding his accent and giving lots of smoldering glances. Kristen Stewart as Bella-- hmmm, I could go either way. Yes, her performance was a little bland, but let's face it, the character of Bella is bland. She has no life outside of Edward. She refuses to have any sort of meaningful relationship with her parents or any of her friends.

The supporting vampires were acceptable. Like I said, not much was required except to look attractive and make cool poses like you are about ready to pounce on someone.


The chemistry between Bella and Edward was off balance. Edward was sparking on her, but I didn't see it from Stewart.

I will tell you what worked: Vampire baseball. Awesome! And the soundtrack was great. I think unless you have read the books and/or are under the age of 18, there is really no draw here.

I liked it, but then I have read the books and am sort of invested in the story. I love the character of Jacob and am interested to see if Taylor Lautner can muster the cajones to play this conflicted character. I am sure the casting directors are hoping he will grow in height and breadth in the next couple years to be able to appear as mountainous as Jacob is supposed to be. Either that or they are going to have to CGI the life out of him.

Can we make a movie tie-in about nothing but the history of vampire baseball and watch attractive vampires playing the game? I'm in.
movie review paranormal romance

april said…
I saw it the day after thanksgiving..i had to laugh a few times with edward's pained gazes...and i laughed when they flew through the trees. i did like the ballet studio smackdown, though, and the vampire baseball was pretty sweet, too :)
December 3, 2008 at 4:46 PM