A Closer Look at Christopher Nolan's The Dark Knight (2008) 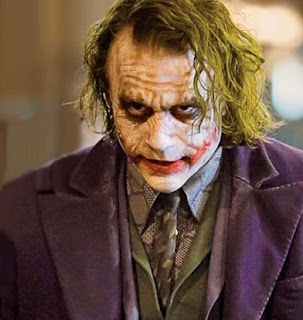 I went to my second viewing of The Dark Knight over Thanksgiving weekend. During my first viewing, I remember thinking, "This is awesome!" What's not to like? It has great special effects, riveting performances by many of the characters, though not necessarily Christian Bale (What's with that lisp?), haunting music, and a stellar plot. Even though it goes longer than two hours, you don't get bored.

On this second viewing, I found myself in a more contemplative mood. I was thinking, of course, about Heath Ledger's Joker. I think this character has a great deal to teach us about the true nature of evil. In fact, I would say this is the most honest portrayal of pure evil we have ever seen in a movie. There is a trend in recent media to try to "understand" criminals. Oh, he had a rough childhood. Poor him, that's why he's the way he is. And I am not belittling that. Often there are circumstances we can't see. And if we are truly going to love people unconditionally we need to hear their stories without judgment.

But the Dark Knight's Joker has no reasons. He gives so many different stories about why his face is cut up, that we don't know which one is the truth. Maybe all of them are true; maybe none of them are. Why is he evil? Because he just is. There is no reason or rhyme. He wants to steal, kill, and destroy all hope and joy. We can't reason with him or hope to persuade him. Even the threat of violence does nothing to stop him from wanting to make others miserable. And he wants others to be evil as well.

In one scene of the movie, he gives the passengers of two different ferries each a control to blow the other ferry up with. One ferry is filled with convicts; the other with normal citizens. The point he wishes to make is that when it comes down to it, we're all the same. It's not enough to just do evil himself. He wants other people to recognize the evil inside of them. You will notice that the Joker consistently asks his victims to be participants in his evil plots. After he kills one man, he throws down a sharpened stick and asks the dead man's followers to fight to the death to take the only available spot on his team. He captures a man, makes him dress up as a newscaster with a painted "Joker face" and read a speech including a few forced laughs. In the worst case, he forces captured doctors to dress up like clowns and tapes guns to their hands so that it looks like they are the ones threatening the doctors (who are actually the Joker's group dressed up).

My faith teaches me that there is a real enemy like this who wants to kill, steal, and destroy (John 10:10). He prowls around like a hungry lion, looking for ways to bring evil into my life and make me a perpetrator of evil (1 Peter 5:8). And if I accept his suggestions, he will be filled with glee. We can never hope to face him down on our own strength. Because he knows us well and will use every tool he possesses to bring about his purposes. He knows every weakness we have. He needs to keep us down because he knows what we could become, and it feels him with fear.

In The Dark Knight, the Joker brings out Batman's worst side by tampering with the things that mean the most to him: his loved ones. Nothing is sacred to the Enemy. But there is One who has defeated him once and for all, and we can have this power by calling on His name. The triumph of the Dark Knight isn't that he lives to see another day, but that he refuses to give into his dark side. He doesn't want to be the Joker, and he tries to help his friend do the same thing.
crime movie review spirituality superhero stories

Lindsey said…
right; it was more annoying the second time. It's funny you said that because I went back and read your entry last night and saw that I gave you a hard time about your comment. ha ha.
December 3, 2008 at 9:06 AM

Dr. Deb said…
I thought it was a great, powerful and dramatic movie. And the psychological elements were an obvious treat for me.
December 5, 2008 at 7:47 PM

Kristi(e) said…
The evil was overwhelmingly evident that I've only seen it once and may keep it that way. I was crying and inconsolable while watching it in the theater. I was on a double date and had both my boyfriend and my best friend holding my hands. I couldn't help think that there were people that evil actually alive and it freaked me out beyond belief.
January 9, 2009 at 2:01 AM

Lindsey said…
It is truly a disturbing movie. I am glad you had two people to hold your hand during the film.
January 9, 2009 at 9:16 AM