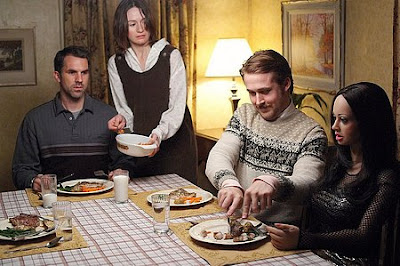 If anyone had told me I would one day be crying during a movie about a man and his blow-up doll, I would have called them a liar. But, here I am, going through at least 3 Kleenex even after the movie is over. Lars and the Real Girl is a touching, quirky film that is a lesson in why people do the things they do. Anyone that is interested in social work, counseling, psychology, or ministry should watch this movie.

Lars is a quiet young man (probably 30s) who does not like to be touched. He works in a cubicle in some random office. Currently, he lives in the garage of his childhood home. His brother, Gus, and new wife, Karin, live in the connected house and are expecting a child soon. Karin puts a great deal of effort into trying to pull Lars out of his shell. Gus, on the other hand, thinks Lars is happy how he is. It's his choice to spend time alone, isn't it?

The status quo is shaken up, however, when Lars brings home a new girlfriend. Her name is Bianca, and she is a blow-up doll.

But Lars doesn't realize this, or if he does, he doesn't acknowledge it. She is, to him, real. He talks to her as if she is. For everyone who thinks sounds disgusting, take note: his relationship with Bianca is not sexual by any means. On the contrary, Bianca used to be a missionary and the two of them insist that Bianca sleep in the house instead of in bed with Lars in the garage. I say the two of them insist because Lars actually seems to hear answers when he asks Bianca's questions.

At first everyone is shaken up. The four of them go to the family doctor under the guise of needing to make sure Bianca is in good physical health. Dr. Dagmar suggests to Gus and Karin that Bianca is here for a reason and they should just ride it out. She asks Lars to come in once a week to make sure Bianca is all right. While they wait for the treatments to take effect, Dagmar and Lars get a chance to talk, and voila, Lars is in counseling without him even knowing it.

Karin wants to do what is best for Lars. Gus just wants this little problem to go away. This is making it all too apparent that maybe things aren't all right with this family. On the positive side, Lars starts spending more time around other people. People of the town, including preachers, hairdressers, and hospital workers, all treat Bianca as if she is real. This seems to give Lars the courage to come out of his shell, but he isn't the only one who changes.

Bianca helps this community and this family come together in unexpected ways. The acting is superb. Ryan Gosling as Lars is sure to get an Oscar nomination. Paul Schneider as Gus is the perfect brother who would rather bury painful issues than deal with them. Patricia Clarkson as Dr. Dagmar is a truly compassionate doctor that would put any counselor to shame.

Lars and the Real Girl has now moved up to my top favorite movies of all time. Anyone who sees this movie will be pleasantly surprised. During the movie, I saw one couple get up and leave. I have no idea what they could have been offended about. There is nothing sexual or gross about this movie. The blow-up doll merely becomes a physical embodiment of one man's terrible loneliness in a world where he was heartlessly abandoned.
comedies drama movie review romance

Dr. Deb said…
I totally agree with you on this film. I saw it advertised and thought, "Okay, this is gonna be a weird, must-miss-movie." But I am so glad I read the DVD when I came across it in the movie store. RG's acting was fabulous. And the psychological aspects were spot-on. So well done. And if every community could rally around a person who has special needs, wouldn't the world be an awesome place?
July 20, 2008 at 9:12 PM

Lindsey said…
Totally. I like how the people did not run from his pain (as his brother did) and instead embraced and him in the process.
July 20, 2008 at 9:22 PM