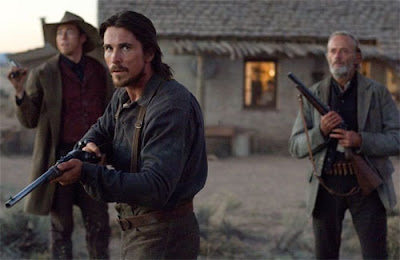 This was a Western well worth watching. The genre is not dead after all. The film is full of star power but still gritty enough to be appreciated by the arthouse crowd. Christian Bale is Dan Evans, a husband, father, and ex-war veteran with a gimpy leg. Russell Crowe is Ben, the villain, an intelligent crook who commits crimes purely to make money he didn't earn. He's not a bad guy. Ben doesn't kill out of spite.

In a purely dumb luck encounter, Dan ends up helping to capture Ben. The sheriff is going to play completely by the book. Ben won't be hung. He will given a fair trial in Yuma. But Ben's gang is sure to try and stop them. The local sheriff decides to hire four men to get Ben to the train on time, Dan being one of them.

Dan's oldest son, William, is so enamored with Ben he can't see straight. On the side, he reads dime store novels about Ben's adventures. He is ashamed of his father and his supposed weakness. After all, his dad hasn't been able to protect the family from fires intended to drive the family out of coveted land. William ends up following Ben against his father's strict orders and joining this band of make-do deputies.

Throughout the course of the journey to deliver Ben to the authorities, Dan is wary to get too close to Ben. But whenever a group of men spend time together, a bond of brotherhood is inevitably formed.

Dan ends up saving Ben's life on more than one occasion and vice versa. You can't help but like Ben more than any of the "good guys." When he starts knocking his captors off one by one, he only goes for the annoying people. One man actually helped burn down Dan's house. This is not a guy we miss. The other casualty is Byron, a man who insults Ben's mother. And he sure knows how to woo the ladies. He talks to them and makes them feel like they are better than their lots in life.

The strongest thing about this film is the two lead actors. At first glance, they appear to be two sides of one coin: the wholesome family man and the glamorous criminal. What could they possibly have in common?

Ben is constantly surrounded by mindless thugs, especially Charlie Prince, a man who is apparently in love with Russell Crowe, though subconsciously. He kind of enjoys talking to the ethical, rational Dan.

In an amazing set of circumstances I can't explain fully, Ben ends up aiding Dan in his attempt to get him on the train. This film is a favorite of the year and is sure to foster awards in the winter.
movie review Westerns