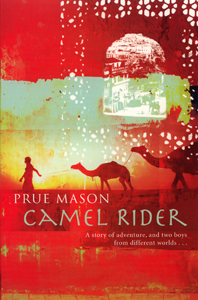 The timing is right for books like The Camel Rider to appear for children. With the hot success of books such as the Kite Runner, there is increased interest in Muslim culture and characters. This middle grade adventure story fits the bill. Aussie Adam lives with his family in the Middle East on a compound in the fictional city of Abudai. Adam is bored of his life and longs to get away from the thumb of his overprotective parents. His only joys are his beloved dog, Tara, and the hours he gets to surf with his buddies. Walid is a young boy from the Middle East who is a camel rider, a small child trained to ride camels in races that men gamble on. His mother felt pressured to give him up so he could have a better life and a possible education, but he spends his days abused and beaten by his guardians.

The lives of these two boys intersect when bombs are dropped near the compound.

Adam's parents are both away and so a family friend grabs him for an evacuation and chooses to leave the dog behind. Now Adam has to escape the car and go back to save Tara, his faithful dog. When Walid accidentally lets a camel escape, his guardians decide to drop him off in the desert tied up and left with no resources as punishment. Adam finds Walid tied up near the mouth of a cave and thinks he can show him the way home. Adam and Walid speak different languages and don't trust each other, due to negative stereotypes each of them have been taught. But in order to survive and get home, they are forced to work together.

Since they can't understand each other's language, they try to use gestures, which cause different levels of success actually getting the message across. For instance, when Adam becomes very hungry, he decides they should eat Tara's dog food. Walid is horrified for he has heard white people eat dogs. When Adam shows him the can, Walid thinks Adam is suggesting they eat a dog for food. We get to hear the thoughts of both boys and see why they are reacting the way they do. A different font is used for Adam and Walid to differentiate their thoughts. I really enjoyed the book. There was suspense, action, humor, and friendship.

I don't think the characters were developed as fully as they could be. I also think the plot was a little too predictable. But the story was still compelling. It shows that when language barriers exist, it is so easy to misinterpret what others are saying. Maybe it will encourage readers to take a second look before they jump to conclusions about people from other cultures. Both boys realize they have something to learn from each other. I would recommend this book to children in grades 4-6.

The cover art gives an air of mystery and will attract readers. For more information about Prue and The Camel Rider, you can visit her website, where you will find Arabic greetings, set pictures for the book, and a teacher guide with discussion questions. These are great features, which teachers will appreciate and increase the book's appeal for educators and book club leaders.