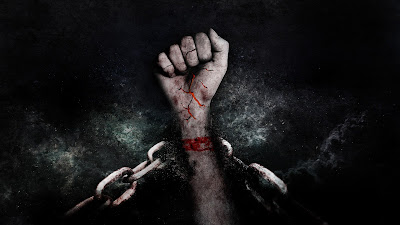 Black Snake Moan is a redemption story cleverly set in the hillbilly South. The acting is superb, including an excellent performance by pretty boy Justin Timberlake. Lazarus (Samuel L. Jackson) and Rae (Christian Ricci ) are two lost souls, seemingly acting off impulses neither one can control. Lazarus, an elderly blues guitarist, is torn up that his wife left him for his younger brother. He turns to booze and music for comfort. Rae, young, white, and the town slut is addicted to sex and can barely wait an hour after her military boyfriend (Timberlake) leaves for his enlistment before her next dip.

Their lives intertwine one night, when Rae, high from a party, is raped and beaten and left in Lazarus's driveway. I know this sounds brutal, but this is not done in a heavy, depressing manner. On the contrary, this story has a whimsical tone peppered with lots of deep fried Southern flavor. Yes, Rae is attacked, but she doesn't seem to mind. She knows it's a natural outcome of her behavior and doesn't really seem to expect much more of menfolk, a clue to the truth about Rae's past.

Lazarus, raw from his wife's abandonment, decides it's his job to deliver Rae from herself.

Initially, he just plans to tend to her bruises and send her on her way. But when he realizes what this lady does with her time, he decides he is God's messenger ("I will suffer you," he says to Rae.). As soon as she can walk again, Rae is ready to hit the town again. Lazarus responds by chaining her to his radiator. She begs, please, cajoles, and seduces, but he won't unlock that padlock.

Rae assumes Lazarus wants from her what every other man wants and tries to seduce him. Lazarus is outraged with her assumption and responds by turning to the Good Book. That's right, Lazarus is an alcoholic Bible beater. And so starts a clever chess game as each tries to get the upper hand over the other. By all outward signs, Lazarus seems to be the stronger of the two. After all, he is not the one chained up. But Rae starts to figure things out about Lazarus and uses these truths to pry into his brain. They have more in common then they realize and gradually, they grow to need each other.

There is a telling scene when Lazarus start giving Rae a lecture on how her sleeping around is impacting her for the bad. But as he keeps talking, it becomes clear that he is not talking to Rae but his own wife ("You sleep with my brother; kill my baby!). Are Lazarus's intentions as pure as he believes? Is he doing this to help Rae or punish his wife?

How do these two who mostly scream at each other throughout the movie find healing love in their friendship? You will just have to see.

The acting is great; the soundtrack is hearty. The music sets the mood for this film and plays an important role in creating tension. When Lazarus plays the tune "Black Snake Moan," Rae sees a man from her past in her mind and clings to Lazarus's leg for protection.

While Rae is consistently sexual throughout the movie, her relationship with Lazarus is more like father and daughter. Lazarus has someone to be a hero to, and Rae has a male figure she can rely on for once. The movie ends with hope, something we all need.

Once again, let me say, if you didn't know Timberlake could act, you are in for a treat. He plays a reasonably good unstable male!
drama movie review music