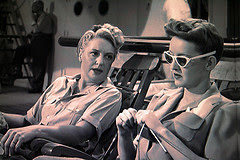 Now, Voyager stars Bette Davis in what I think is her finest role--even better than her performance in All About Eve. I know many may argue, but she was so unbecoming at the beginning of this movie, I barely recognized her.
Charlotte is a spinster with bushy eyebrows and a scared rabbit look in her eyes. Her mother has driven her to the brink of madness from too much attention and too much control. When Charlotte comes downstairs to meet Dr. Jaquith (Claude Raines), the word that comes to mind is "trapped." Charlotte is trapped in a world of unhappiness. Her mother forces her to wear unattractive clothes, won't allow her to lose weight, and has chased away every suitor.

We find out that Charlotte was born late in life and probably wasn't wanted. The only comfort her mother takes in her birth is knowing that Charlotte will care for her when she is old. So any joy that Charlotte takes in life becomes a threat to her mother. The mother fears Charlotte will leave her alone and helpless if she gets married. Gladys Cooper plays a most detestable mother figure. Charlotte is the most pitiable of all women. She knows she is unloved, unwanted, and faced with a life of eternal misery. To ease her happiness, she lives a secret life behind her closed door, smoking cigarettes and reading unsuitable books.

Dr. Jaquith immediately insists that Charlotte spend some time in his sanitarium to rest up and get her mind straight. Finally she seems well, but of course, she is resisting the idea of going home. Dr. Jaquith and Charlotte's sister conspire to send her on a pleasure cruise. When Charlotte emerges from her cabin, she looks nothing like herself. Her clothes are fashionable, including non-sensible shoes! Her brows are trimmed. Her face is perfect. And the shyness she felt is transferred into an aloof quality we know all men find irresistible.

She falls in love with a fellow passenger named Jerry (Paul Henreid) who I later realized was Victor Laszlow in Casablanca. But, the passenger just happens to be an unhappily married and father to two children, one happy and one unloved and unwanted just as Charlotte had been. Their love is doomed from the start, but they take joy in the connection they make. When they are away from each other, they try their best to fulfill their duties in a fashion of honor. Charlotte dates other men, and Jerry is a good husband to his nagging wife. When they are together, they rarely kiss. Instead, they filter their passions into slowly smoking cigarettes simultaneously while gazing worshipfully at one another. There is also a plot twist where Charlotte ends up caring for Jerry's unloved daughter and finding fulfillment through that.

It's a great movie, full of Hollywood dazzle. The soundtrack was especially beautiful. I kept thinking some of the music themes were very similar to those in Gone with the Wind. And wouldn't you know it, the soundtrack was by Max Steiner, conductor of the orchestra for GWTW . The reason it took me so long to recognize Paul Henreid was because Humphrey Bogart totally outsexed him in Casablanca. But in this movie, he seemed a dream: A perfect gentleman, even to the wife who is tearing him to pieces. Of course, there was the usual overdramatization of the acting performances, but that is signature Hollywood.

It was a little maddening to me that Charlotte kept pushing every other guy away. She preferred to pine after a lover who could never give her the life she deserved. It made for a very romantic aura, but I also wished she could find her own happiness apart from him. After all, I believe it wasn't him Charlotte wanted, but simply a life separate from her mother. Their secretive affair fulfilled that for her, and even after her mother dies, Charlotte seems happiest when her life is kept behind secret doors, never to see the light of day.
classic movie drama love stories movie review