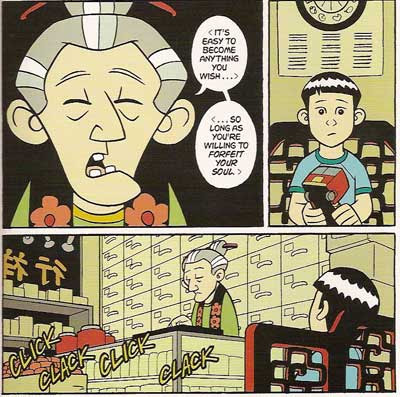 American Born Chinese by Gene Yang was the Printz Award winner for 2007. All the reviews I read about this graphic novel have been very positive, and I must agree it is a masterpiece. Although this graphic novel can be enjoyed on many levels, as a Christian I enjoyed the way the artist/author weaved scripture into the story. We all have filters we view the world through, and this is also true of the way we approach media, whether it be books, movies, poetry, etc. My Christian faith is a large filter for me, and it impacts the way I view books.

American Born Chinese is a story told in three separate stories that eventually converge. The three plotlines came together in surprising ways that add to the enjoyment of the story. It is part of the mystery of the book.

In plotline one, Jin Wang has started a new life in a new home and a new school. He struggles to fit in with his new classmates who only see his differences. His classmates focus only on the negative stereotypes they have heard about the Chinese people. He is mocked and picked on, and the only friend he can find is a bully who threatens to make Jin eat his boogers if he won't share his food. I found myself cringing a little as I remembered a classmate that was in my elementary school. His name was Nguyen Ly, but later on he changed his name to one that was American. Now I understand why he wanted to do that. It is hard to be different. One more important aspect to this story is that Jin loves his transformer robot. One day, he wants to be a transformer himself.

In plot two, the King of the Monkeys is angered when he is turned away at a party for being a monkey. No matter how much skill he acquires, he is belittled for being a monkey. In his anger, he beats the tar out of multiple people using his kung fu skills. Finally, he receives a visit from the great Tze-Yo-Tzuh, a god, who encourages the Monkey King to accept his role in life and to take enjoyment in that role. Be proud you are a monkey, he seems to be saying. The Monkey King won't listen and is "punished" for his refusal.

In plot three, a teenage boy named Danny feels humiliated every time his cousin Chin-Kee comes to visit him. Chin-Kee goes around at Danny's school seemingly encouraging all the negative stereotypes people have towards Asians. He has buck teeth, can't correctly pronounce his l's and r's, and just makes a fool of himself.

First, the technical elements: The artwork is amazing. Each drawing contains amazing colors and makes good use of frames to create motion and time. Also, the author uses a creative device that shows us when a person is speaking in a language other than English. The text is written in English but the quotation is surrounded by angular parentheses. This way, the reader knows the speaker is not speaking English, but we can still read the conversation.

One thing no one has pointed out is that many of the speeches made by Tze-Yo-Tzuh are taken directly from the Bible. Most of it is from Psalm 139. This is the passage where it talks about God knowing us completely, when we get up and when we lie down. We cannot escape him. I am linking the whole chapter in this for anyone who wants to read it.

What I got out of this story is that God created us each to be something, and he does not make mistakes. We can fight against it, but we usually just hurt ourselves. Sometimes we feel angry that God made us the way we are. When you make peace with your situation, however, the anger goes away, and we can find contentment. The Monkey King spent so much energy on trying to prove his worth, but all along, he was fine just how he was. He was rejected from the party, but maybe the party wasn't so great after all.

When the monkey was fighting and striving, he was always angry and never got what he wanted. It was only by accepting his role in the world that he found himself. And notice his role was unselfishly giving of himself to help others. And the reason I put punished in quotes above is that I don't really think the god in this book punished the Monkey King out of anger. I believe he did it for his own good to lead him to the truth. Tze-Yo-Tzuh tried everything before he buried him in a mountain of rock.

Please don't think I am immune to the cultural implications of this book. When we see the cruelty with which the world treats Jin and his friends, it is heartbreaking. I hope people will read this work and re-think these stereotypes. But I also know that stereotypes exist, and you can only change yourself. Jin, the Monkey King, and anyone else who is discriminated against cannot wait for the world to change in order to find the happiness we all deserve. We must each act with integrity and take joy in the roles we have been given in this world, whether they are received with praise or hostility.
book review graphic novels spirituality