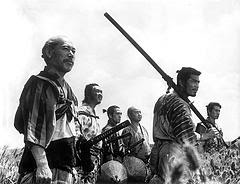 Last week was Akira Kurosawa week at my place. I have a deep-seated love of everything Japanese. About two years ago, I watched The Seven Samurai, which was one of the BEST movies I have ever seen, hands down. I had heard so much about this movie in pop culture but was never sure what all the fuss was about. It took me several days to get through the film, but it was heavy with meaning. It made think about what is a hero? And what is the cost of being a hero? In the Seven Samurai, poor farmers seek out the help of seven samurai to fight off bandits. The bandits regularly stop by and steal the crops they all slaved to grow. The townspeople know they need help.

They find these samurai superheroes that can kick butt, but most of them also have lovable personalities that make you want to take them home and keep them as a pet. I especially liked the leader of band (played by the amazing Takashi Shimura) and the comic character, Kikuchiyo (Toshiro Mifune). As the town learn how to fight and defend their homes, the whole community changes from a sniveling, helpless bunch into fearsome warriors proud of their heritage. It is amazing how the samurai and the townspeople come together. You can also see that the samurai long for some of the things that the townsmen have: wives, kids, and a home.

There are so many wonderful moments, and you will be surprised at what happens at the end. For a hint, just ask yourself this question: When a hero who is a loner risks everything to help the weak and helpless, what reward does he receive at the end? Of course, what did he really risk if he owns nothing? Also, why would a loner who has no money or possessions of his own do this for a group of people that could pay them next to nothing? The movie is an action movie, but it has all the emotional depth of an epic. You can see that although I watched this film years ago, it still haunts me.

Okay, fast forward to last week. I watched Rashomon, another Kurosawa film, and The Magnificent Seven, a Western rendering of the Seven Samurai. Neither was as impressive as the masterpiece mentioned above, but they both had their merits.

Rashomon is a story told in multiple perspectives. A bandit, a samurai, his wife, and a woodcutter passing by all tell their own versions of a story where we know two facts: the samurai was killed and the bandit and the woman had intercourse. But everyone has their own version of the truth. Who is telling the truth? There was a more contemporary movie called Hero where they used the same story-telling strategy. Rashomon is interesting, but I got tired of watching the people stare at each other in horror. Every action took so long to happen. There was this one scene where the bandit and samurai are fighting and it just . . . takes . . . so . . . long. Still it’s a classic Japanese film.

The Magnificent Seven had wonderful acting performances, a catchy musical score, and gads of funny lines. But the whole did not amount to more than its parts. I did, however, enjoy the trailer: “Seven, seven, sevennnnnn. The magnificent sevennnnn.”
classic movie movie review