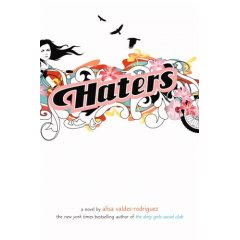 I really wanted to like Haters. It is a school story mixed with elements of paranormal romance. The main character has a strong psychic ability. She can see things before they happen. Over at the Disco Mermaids, Eve suggested you could describe the flavor and plot of a book by combining movies. This idea appeals to me since I am a film addict. I would call this book Heathers (dangerous run-ins with popular girls) crossed with Premonition (seeing the future) crossed with a Harlequin romance (explicit sexuality and romance). No, I'm not kidding.

Part of this book I really liked. The narrator had a very snarky, hip voice that made her appealing. Pasquela Archuleta, or Paski, has just found out that her dad is moving them to California. It seems his comic book, Squeegie Man, has been optioned for a movie deal. He's going to be rich, but he has to move to California. He and Paski move to the OC; Paski must leave her dear friends and new boyfriend behind to start a new school. Before she leaves, her grandmother gives her an amulet. She tells Paski she must honor her psychic gifts or there will be trouble. Paski doesn't give a toot; she would rather be a normal girl.

The problems begin as soon as she starts her new school. The school halls are ruled by haters: popular, gorgeous kids that are used to getting their own way. Leading the pack are hot and sexy Jessi-caaah Nguyen and her two cronies. Paski immediately is hated by the haters since she can ride a bike good. Jessica is the motorcross champ and wants to keep her title and hot boyfriend, Chris Cabrera. But of course, Chris has a thang for Paski. They are like magnets to each other.

Okay, so the plot is pretty predictable. What makes it different is that Paski has this psychic ability that guides her life. No matter how mean Jessica is to her, Paski is haunted by visions of Jess having a horrible accident. She is torn between her fear and loathing of Jessica and her need to warn her of the future.

This story should have been intriguing and highly entertaining. And it was, about half of the time. But what killed it for me is that Paski, who could have been brave, beautiful, smart, kind, and independent, keeps slipping into all sorts of annoying behavior.


I mean, Paski rocks on a bike, so she has this whole tomboy thing going for her. Time after time, I was annoyed at her wishy washy personality. One minute she is saying how disgusted she is at what the haters did, and the next she is going over the their houses and agreeing to do what Jessica wants. At one point, I turned off the CD in frustration. I really wanted to have a "Paski tells off Jessica" scene, but it never happened. Paski is a hot mamacita, so she could have gotten all Selma Hayek on that hater's buttocks. GRRRR.

I still think teen girls would like this. This is definitely for an older audience (17 and up) because of several detailed sex scenes and crude language.
book review paranormal romance teen fiction

alexgirl said…
I know what you mean about audio-books coloring your perception of things. My sister has been listening to Harry Potter on tape and she loves it (obviously having already whizzed through the books).

Haters doesn't sound *great* but your description of Heathers meets Paranormal makes me very intrigued!!
Thanks for the review. Maybe I'll look for it at my local library.
April 23, 2007 at 10:08 AM

Anonymous said…
i didnt like the sexual part you know the one whit Paski and Chris Cabrera
July 1, 2008 at 12:18 PM