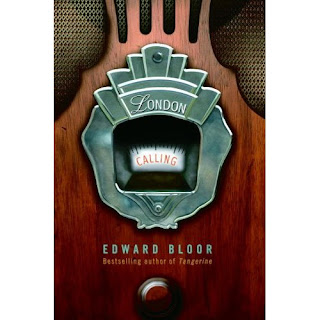 Edward Bloor is one wacky guy. He comes up with original plots, and he knows how to execute them with skillful writing. In London Calling, our protagonist is Martin Conway, a bright, unhappy 12-year old with little drive. He is a self-proclaimed hermit who prefers to live in his home's basement. Martin's nuclear family consists of an alcoholic dad that works for an airport steakhouse chain, an unhappy mother who works as a secretary at the private school Martin attends, and a sister who is a genius and works at an encyclopedia company as a fact checker.

Martin has only two friends at his private Catholic school, which is controlled by the Lowery family. The Lowery family claims that their ancestor, Hollerin' Hank Lowery, was a World War II hero. They have some money, and so the school kowtows to that family.

The current reigning Lowery loves to pick on the weak, and he makes regular sport of picking on Martin and his friends. On one such occasion, Martin's friend, Manetti, takes a piece of concrete and chucks it at Lowery's head, causing Lowery to whine like a little girl. It also, unfortunately, breaks a chunk off a statue of Hollerin' Hank, which the school was just about to unveil for the Hall of Heroes. The school, in a guise of a fair trial, rules that Martin and his friends are completely responsible, suspending Martin from school.

Martin begs his mom and principal that he be allowed to remain on regular suspension. In lieu of attending school, he asks to do a home study about the radio his Grandma gave him. He gets permission, but Martin has a secret agenda. The radio is actually a time travel device. When he sets it to a frequency that receives static, Martin is transported back to 1940s London, where he meets a Jimmy Harker. Jimmy says Martin has something he needs to do, but he doesn't know what. Martin reluctantly follows Jimmy on several late night adventures, involving blackouts and the Germans bombing London. Martin suspects he is going crazy, but this is where his sister comes in. As a fact checker at an encyclopedia, she can verify or deny the facts he records from his travels.

Martin discovers he does have a mission to fulfill, and it will impact not only the Harker family, but his own family as well. Martin is asked repeatedly, "What will you do to help, when the time comes?" Martin finds out that he, yes, even he, a 12-year old boy, can make a difference. He also learns to hope again, and his family receives some healing.

I just loved this book. Any book that causes me to shed a tear is usually a winner for me. In addition, this story crosses genres. It was historical fiction, and it was also science fiction. It had the adventure and purpose that boys crave, and it had relationships that would appeal to girls.

Kelly said…
Do you like King Dork? I really, really did. But sometimes I wonder if it was because he really captured my generation's point of view. (I think he's exactly my age.) My sister who is also an X-er, LOVED it. My much younger sister liked it less.

Lindsey said…
I haven't finished King Dork yet. But you may be onto something. I was laughing at the fact that Portman was right on about AP classes and how you watched movies in AP history.
March 20, 2007 at 10:13 AM