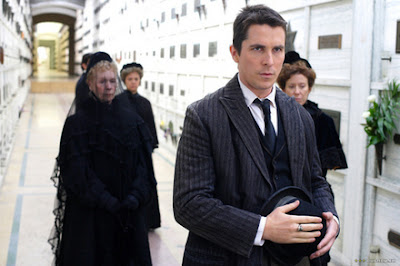 The Prestige is an enjoyable ride, which I was more than willing to take. This movie was directed by Christopher Nolan, who also directed Memento, one of my favorite movies of all time.

In The Prestige, we find out a murder has allegedly taken place. A magician on stage falls through a trapdoor into a water tank and then drowns. His supposed killer is on trial for this, even though the court has many doubts. The man who drowned willingly went into that water tank as part of a magic act. For all they know, the death was just a magic trick gone bad.

We are put into this story with no background, so we need more information.

We then learn more about the story from alternating flashbacks and scenes from the present day. The story is about rivalry, obsession, and hatred which mimics the most passionate love affair.

Two magicians, who were partners in the same magic act at one time, begin a cycle of revenge. One man wrongs another, and then the other waits patiently to one up him. Hugh Jackman plays Robert Angier, a charismatic showman who knows exactly how to hold the audience's attention at his shows. But he lacks originality. His tricks have all been done before. Christian Bale plays Alfred Borden, the smarter of the two. He is a natural magician. He can fool anyone, but he's a lousy showman. There is one great scene where Borden is sitting in jail and a guard is mocking him. He starts to show the guard a magic trick with a rubber ball. When he messes the trick up, the guard laughs, only to find that Borden has somehow chained his ankle to a table.

Finally Borden does what Angier calls, "The greatest trick I have ever seen." It is called the Transported Man. Borden goes from one side of the stage to another in milliseconds. How does he do it? Angier becomes obsessed with discovering the secret to this trick. His manager, Cutter, insists that he is using a double, but Angier is just as sure that he is not.

We also meet the women in their lives. Alfred is married to Sarah, who is quiet and sweet-tempered. She insist that Alfred not say I love you unless he means it that day. The gorgeous Scarlett Johansson plays Angier's and then Borden's assistant and mistress to them both.

This movie is more than the sum of its parts. There is a lot of chemistry between the characters. Not just men and women, but between the two male leads. The interactions between Jackman and Bale are all riveting. I kept wondering why the two of them didn't just admit they were in love with hating each other. Their rivalry overshadowed everything, including wives, kids and reputation.

There are so many great moments in this movie, too. You learn the amount of practice and effort it takes to develop a magic trick. You see how many things can go wrong, and we get a glimpse into why some men are still willing to risk it all to hear a gasp of amazement from an available crowd.
drama movie review revenge