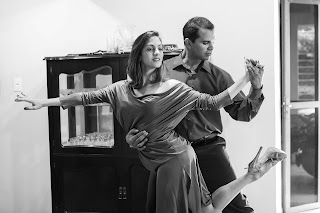 Richard Gere plays an overworked estate attorney. After your loved one dies, he makes sure all the papers are signed and all the "i's" are dotted. Gere is bored of his life. He and his wife pass like two tumbleweeds, each running to an endless series of work and school-related meetings. One night while riding home on the metro, he looks up and sees J.Lo looking forlornly out the window. Enraptured by her face, he continues this stalker-like behavior until he gets the guts to go into her dance studio and sign up for ballroom dancing lessons.


It turns out that J.Lo is the assistant at Madame Mitzi's School of Dance. He and two other guys, Vern (Omar Benson Miller), who hopes to impress his girlfriend, and Chic, who wants a girlfriend (or so he says), take lessons from Madame Mitzi herself. He begins to enjoy the dancing and feels more alive. Even his daughter starts noticing a change in him.

A predictable plot unfolds. Gere becomes a fabulous dancer; he considers cheating on his wife with J.Lo (but doesn't); both his classmates end up pretty good, too. All of this comes together in a grand dance championship with Gere almost winning the prize. It was still very fun. I found it most surprising that Gere did not cheat on his wife. In most of today's movies, they can't seem to exist without a bedroom scene. This time, the audiences have to make-do with a little sultry dancing.

Susan Sarandon plays Gere's wife. This is the 2nd time I have seen Sarandon dancing (the first was in Elizabethtown). There is also a fun performance from Stanley Tucci (he recently played Niles in The Devil Wears Prada, and he will be in the upcoming Tale of Despereaux movie). Tucci plays Link, a man who is embarrassed of his ballroom dancing interest. He hides his hobby from his co-workers, and when he dances he dons a wig and false teeth. I really like Tucci and hope I see him in more movies.

I recommend this movie to anyone who likes ballroom dancing, musicals, or chick flicks with good parts for men.
movie review romantic comedies